I’m slow to blog lately since I’ve started running the new two-group campaign. One of the players in one of the groups, though, is a professional illustrator/cartoonist, and he’s been kind enough to draw portraits of his group. See more of his art at his portfolio site. 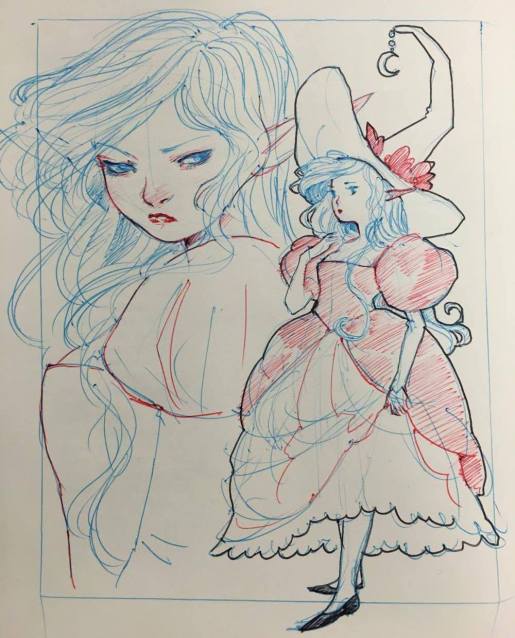 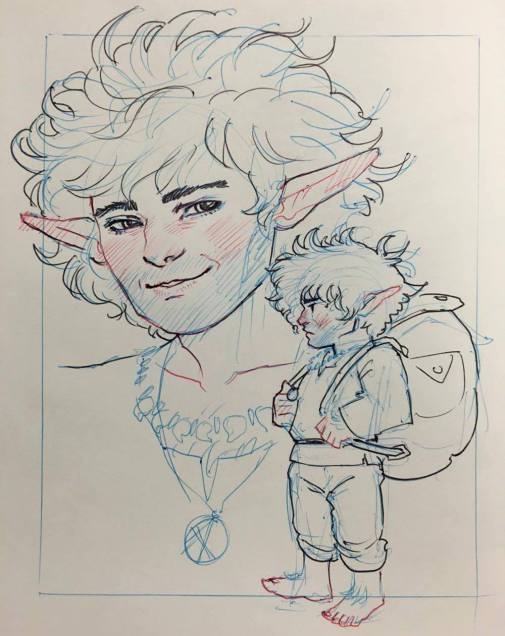 This printing of Hav contains two of Jan Morris’s books, 1985’s Last Letters of Hav and 2005’s Hav of the Myrmidons. Together, they cover both of Morris’s visit to the titular Mediterranean city, a city that transcends its fiction to become real.

Hav is, on Morris’s first visit, a city just like any other: jumbled in geography and history and purpose. The land was originally settled by people known as the Kretev, an indigenous population possibly related to Celtic wanderers, possibly Greek. It was settled and colonized in waves by Greeks, Kurds, Crusaders, Russians, Chinese, a tripartite German/French/Italian force, and British. Modern-day Hav (in 1985, at least) is a mix of all these cultures.

Morris, as a travel writer, approaches the city with an open mind. She wants to know what it means to be Havian—what the Iron Dog statue really portrays, whether Hitler actually visited, where all the Hav bears are hiding out. And she actually finds some answers too: clear answers, obtuse answers, contradictory answers. It’s confusing. Take, for instance, the Iron Dog, a statue at the southern tip of the Havian peninsula:

It was not, when I reached it, how I had foreseen. From a distance, it looks all stark arrogance, its head held so high…but so relentless does it appear, especially in photographs, that some modern scholars have declared it to be not a dog at all, but rather the fox that young Spartans were supposed to take into the hills, to gnaw at their bellies and make men of them…But when you get close to the figure, such notions seem implausible. Whatever else he may be, the Iron Dog is certainly not a fox.

So a dog in name, a fox in photographs, but neither up close. He’s also bronze—not iron at all. One Havian says the dog is actually a dragon like the ones on the Ishtar Gate of Babylon. So it’s a Greek/Babylonian Iron/Bronze Dog/Fox/Dragon, depending on how you look at it, but however you try to classify it (and the classifications will surely change with time and viewer), the dog is there. It can be seen and touched.

The same is true of the people of Hav:

‘Do you really think your friend Mahmoud is an Arab? Some Arab! He’s no more Arab than Missakian’s Armenian!’

‘Of course not. He’s pure Greek, anyone can see that, like half the people in this place who call themselves Armenian, or Jewish, or Syrian…’

‘Dear God,’ I said to Magda one day, trying to assimilate all these confusions, ‘I don’t think I shall ever master the meaning of Hav.’

Morris discovers that it’s easiest to define things when they’re viewed from a distance—a fox in a photograph. But as you get close, as you put your hands around it, definitions get slipperier. Because even if you call Missakian a Greek, what does that mean? Look closer: Greece was a collection of culturally different city states, and it was ruled by Romans and Turks and inhabited by traders from around the world. Calling a Havian Greek is like saying a mixed thing is a mixed thing, and in Hav (and in the rest of the world), everyone is a mixed thing.

When Morris returns in 2005, however, Hav is much changed. Shortly after her first trip, there was an Intervention—an attack by black planes and warships. Much of Hav was razed, but it’s been rebuilt and is now governed by a Cathar theocracy. They believe they’re descended from Achilles’s Myrmidon soldiers, and they’re unifying Hav in their name.

But it’s a false history. The Myrmidons, magically evolved from ants, weren’t real. Hav’s unification only happened due to a fictional narrative being wielded as a blunt force tool. The Cathars have smashed Hav into shape with a story. Those bits of life that don’t agree with the story—the Kretevs, the Arab call to prayer, and the messy, mixed neighborhoods—are all hidden away or cleaned into nothing.

(And there are hints that the leaders of the Cathars are an older generation from the Athaeneum, the center of learning on old Hav. Leave it to the old academics to demand definition at the cost of diversity.)

The fact that the destructive event is known as the Intervention is telling. It could have been called the Battle, the War, the Blitz, the Strike, but Morris chose a somewhat neutral, almost bland term. And where a War would implicitly have two sides, an Intervention is what you do when someone does something wrong. It’s how you get a messy person to clean up their life. One has to assume that the Intervention was part of the Cathars’ plan to get Hav in line.

Morris isn’t allowed to stay long on her second visit. After just a few days, she’s forcefully hustled onto a plane. Is her life too messy for Hav of the Myrmidons? She was divorced from her wife after having five children together, only to be later reunited in a civil partnership. She’s Welsh but British. She served in World War II but helped opposed the Falklands War. And she had to travel all the way to Morocco for sex reassignment surgery because British doctors refused her. Like every real person, Morris is too messy for the streamlined fiction of Hav.

And that’s the scary part of Hav in 2005—its loyalty to its own fictions, even over the happiness, wellness, and very lives of its citizens, is reflected in the national narratives of countries all over the world. It’s the kind of story that makes people think it’s okay to build walls on their borders and to assume that countries only belong to people of one skin color.